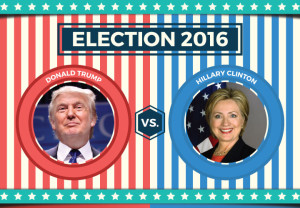 As Election Day quickly approaches, the Presidential campaign of 2016 is in full force and one main question remains: amid all the digital and media chatter, which of the candidates will come out on top in the race for the President of the United States? It is a political boxing ring, everyone throwing punches in order to emerge the winner. In honor of election season, we’ve decided to take a closer look at the different marketing strategies and tactics employed by each of the leading Republican and Democratic candidates. Below are some of the best and worst qualities of each of their campaigns.

For Trump, the biggest initial challenge was finding a way to compete against the large pool of qualified and experienced Republican candidates. Let’s not forget – this is not a man who has any problem gaining attention in the media. Despite initial doubts, he has certainly proven that marketing himself is not his weakness.

Trump knows his audience, his brand, and his followers’ personality. He appeals and designs his presence to a very specific crowd of voters, ones who have now firmly taken his side in the race. His statements, often regarded as bold and unapologetic, certainly don’t appeal to everyone; however, he has pinpointed his target market and addresses their primary concerns in a relevant way.

(As a side note, Trump does most of his campaigning on Twitter. He is known for having anywhere from 1-4 bold, strong statements PER TWEET. Each tweet reaching 9.01M followers.)

One immense problem in Trump’s marketing efforts is his inability to take responsibly for his failures. As of now, he has a large and strong political following. However, we predict that if he continues to pass blame onto outside sources rather than on himself for personal blunders, his consumer trust will be in jeopardy.

For example, he claims that it is not his fault when rallies for his campaign become dangerous and violent. According to him, he simply speaks the words that others are thinking and that while he is vocal about the controversy, he is not the instigator of the result. The flaw in this is that he wants both the credit for starting a conversation, but no blame for when that same conversation spirals into an out-of-control movement. This approach can cause even the most reliable of brands to lose consumer trust..

Hillary’s marketing efforts have recently been compared to those of Taylor Swift in that she regularly finds ways to relate to her fans and followers through strategic and personable social media tactics. For example, she started a Pinterest for “granddaughter gift ideas, hairstyle inspiration, favorite moments, and some other things.” This conveys to the public a representation of her as an everyday woman. It focuses less on her political image and more on the relatable side of her life. This makes her brand more appealing on a variety of levels, rather than unattainable. 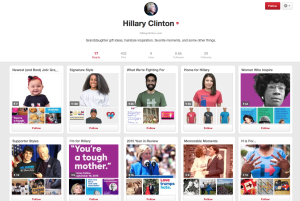 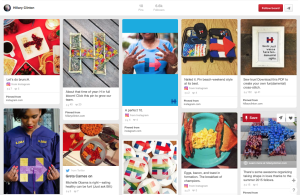 So what’s the marketing lesson learned here? It pays to treat each customer and client on a highly individualized and attentive level. This will make your brand or product accessible to a wide range of people.

Among other things, Clinton has most notably fallen victim to logo critics. After the launch of her new logo, it was remarked that it does not invoke a sense of progression or fluidity – which is essentially the entire foundation of her campaign. Some say it looks amateurish. Others say it is pure plagiarism. And there are those who go as far to claim that the two equally sized vertical bars with a line through the middle represent the Twin Towers. When developing a brand identity, it is crucial to keep in mind your underlying message and how this would translate visually to a very critical public.

Here is the original:

Here are the negative connotations that come along with this logo: 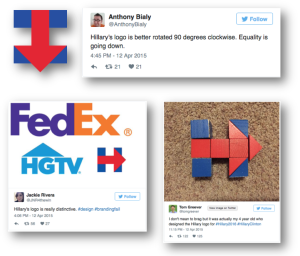 This presidential election is certainly among the most unpredictable in history, and has invoked many a-conversation. As the race wraps up, we will keep our PR goggles on to examine the successes and failures of these two candidates. We will watch, wait, and participate as each candidate works vigorously to attain one of the most influential political positions in the world.