The conversation between consumers and advertisers is constantly changing. There has been a clear transition from “traditional” media towards social media advertising and it’s not difficult to notice the surge of this movement when scrolling through your social feeds.

The Trend in Digital Video

Dynamic visuals and videos break through the constant clutter in your newsfeed and the creative use of short video advertising is proven to grab your attention. In fact, Business Insider reported that in 2016 digital video will reach 5 billion in ad revenue. Videos are sparking people’s interest, and marketers are taking advantage of it. 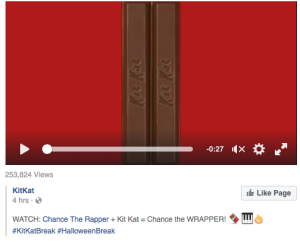 An example of a digital advertisement found on Facebook.

As quoted in the New York Times “For a lot of our clients, Facebook is a very important platform, so thinking about how it’s going to play out there without sound is coming into the discussion earlier and earlier in the process,” said Neel Williams, a creative director at the Martin Agency, which has also repurposed TV Chips Ahoy commercials for Facebook. 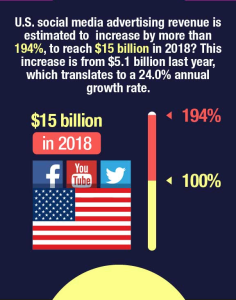 An infographic explaining the dramatic increase in social media advertising.

It’s almost like taking a step back in time. Instead of having the trendiest indie song playing in the background to get your attention, it is now the quick flashy graphics with captions.

According to emarketer, YouTube, Google and Facebook digital video content is receiving a higher rate of viewership along with clicks per minute or CPM than its competitors.

A graph displaying what brands lead in digital video advertising. 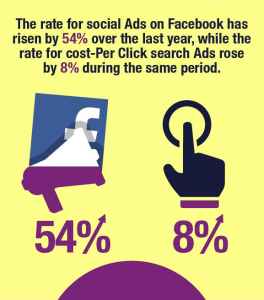 The surge in social media advertising is increasing at alarming rate and is estimated to increase 194% and possibly reach 15 Billion dollars by 2018.

What Does This Mean For Advertising Agencies?

Well the good news is this has opened up a whole new realm of possibilities for digital creative work.

Each platform will need it’s own unique strategy. The viewer expectations when watching a YouTube video is that there will be sound, emphasizing the importance of music and dialogue. Similarly, when a viewer is scrolling through, Facebook, Twitter or Instagram strong visual imagery will be their main focus and sound becomes second priority.

This also raises an interesting question when it comes to TV advertising. Most of us don’t enjoy sitting through a 30-sec ad spot on TV and therefore it is likely we wouldn’t want to while at our computers either, especially when it’s when we’re scrolling through our favorite social channel. Keeping the consumer in mind while creating engaging, digital video content is key.

“The most important factor is where the consumer’s focus is,” Mr. Williams, of the Martin Agency, said. “You can have the most epic TV spot that is a visual feast, packed with the best, most well-written voice-over, read by the most famous person, but if you’re not paying attention to it, then it doesn’t matter.” — The New York Times.

The rapidly changing advertising world is both exciting and daunting. Grabbing a viewer’s attention has never been more desired in the oversaturated advertising world. Ad agencies must get smarter when it comes to creative, engaging video content if they want to win over their target audience online.