In April 2016, Facebook CEO Mark Zuckerberg gave live streaming new meaning when he rolled out the Facebook Live Application. This gateway for both brands and users to engage in is an influential marketing tool that many companies are not taking advantage of … and they should be. Streaming in real-time provides the ability to field your audience’s burning questions and tailor content based on the reactions of your followers.

Live Q&A with astronauts on the International Space Station! L…

Live Q&A with astronauts on the International Space Station! Leave your questions below.

Below are a few ways marketers can benefit from Facebook Live:

Facebook Live gives users the opportunity to watch content on your brand’s Facebook page in an automatic, non-pervasive way. Facebook Live posts will not only engage your current followers, but also attract new ones. Plus, tying a visual to your brand will garner invaluable reactions and comments. Partnering with another brand of influencer in a video is another way to extend reach with this tool.

Watch us explode this watermelon one rubber band at a time!

The Live feature gives you a similar function as that of a newscast or a television show – the ability to connect to your live audience and start a conversation. Loyal consumers of your product get a notification when you’re live and will ideally open the dialogue.  As they comment, your brand responds in real time.

We got some great news on jobs and the economy this morning, and President Obama wants to tell you all about it. So pull up a chair in the Roosevelt Room next to his economic team and listen in!

Whether you are consumer or marketer, your Facebook Live story will represent you. With creative filters and tools, it is easy to express yourself on different forms in an instant feed.

Live at the Airbnb Treehouse at the World Premiere of The #JungleBook!

Live interviews, event coverage, and behind the scenes footage are all ways to share exclusive content with your following.

Live Interviews: Hit the streets! Steve Portigal for Interviewing Users states, “Interviews create connections between builders and the consumers. It makes the problems tangible and human”.

Behind The Scenes: Jason Carr, a former news anchor for FOX 2 in Detroit, updates Facebook Live viewers on a ride to a gig at WDIV-TV, Local 4 News … but he doesn’t tell that right away.

Live streaming is not just here to stay – it’s dominating the social scene.  We suggest you don’t sit on the sidelines for this one.

Updating Your Marketing Techniques for the 21st Century 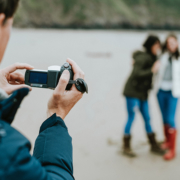 NASA Continues to Explore Social Media with #PlutoFlyby
Signup for the CBC Newsletter
Receive updates on exclusive content created by the CBC team.