Love or hate her catchy music, or maybe just envy her cats—either way, it’s undeniable that Taylor Swift has been an extra-hot topic this week after her public conversation with Apple.

In Case You Missed It:

On June 8 at WWDC, Apple announced the June 30 release of Apple Music, a new music streaming service intended to compete with Spotify, eclipse Tidal’s floundering efforts, and ensure that the almost-defunct Pandora remains as such. Apple Music has been slated to include a $10 streaming subscription plan, a free Internet radio station, and a media platform, which would allow artists to upload new content immediately available to listeners. In an effort to attract users from the competition, Apple also announced a free 3-month trial period—an unheard of and certainly expensive incentive. Immediately controversial, however, was Apple’s fine-print statement that artists, etc. would receive no royalties during that trial period—painful losses for those in the music industry.

The Internet and Apple received an open letter from Taylor Swift: “To Apple, Love Taylor.” In her note, Swift rebuked Apple for disrespecting artists, producers, and songwriters by withholding royalties, in addition she pointed out that the decision is uncharacteristic for the normally progressive brand.

Eddy Cue, Apple Senior VP of Internet Software and Services, responded to Swift on Twitter. He humbly apologized on behalf of Apple and retracted their no-royalties plan. 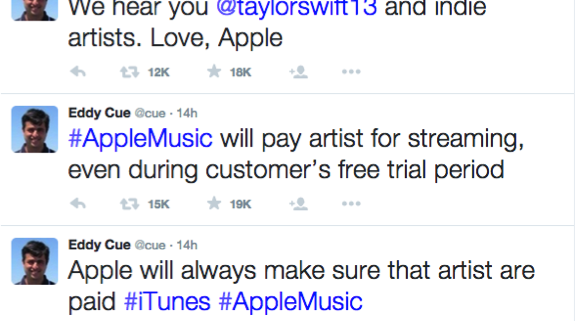 Currently, the Internet is flipping out:

“Taylor Swift took on Apple with a blog post and won, all in a single day”

There are several lessons to be learned from this conversation between Swift and Apple, but also some factors to consider:

The turnaround of this online conversation is staggering and that’s a large part of what makes it so impressive: just 17 hours lapsed between Swift’s article being published and Eddy Cue’s response early the next morning. Apple pounced with a response before other, angrier opinions could be voiced. Thus, the opinions that did hit the news were positive, mostly on Swift, sure, but Apple only seems rebuked and certainly not like they’ve been beaten.

Social media allowed two individuals to correspond instantaneously and publicly. While Cue stated that he privately called Swift after reading her note, the key discussion points were available for the world to read. Good on you, Swift; Apple could not avoid the discussion, and what other response could they have given but a positive one?

Brand, I believe, is the most powerful factor at work in this situation. While this weekend’s conversation took place between Eddy Cue and Taylor Swift, the two are representatives for brands: Apple, and Swift herself representing her $200 million “Taylor Swift” personal brand. Cue stated in an interview that Swift’s letter was not the sole factor that caused Apple to reverse its decision; it was simply that last straw, the final weight that tipped the scale.

By acknowledging Swift’s appeal and logic, Apple has appeared gracious, humble, reasonable, and even good-natured via Eddy Cue’s Tweets. Cue portrayed more personality for Apple than we’ve seen since the days of the Mac-PC commercials. This isn’t a PR nightmare, as some articles have stated, but rather what turned out to be a positive, productive, and ultimately mutually beneficial conversation between two of the most powerful brands in the world.